I know it's been a bit quiet here the last few weeks and I've been quite busy working on a few updates to Furthermark and to my website. In the meantime, I've introduced a new dark mode theme to Noah W.org. It works by toggling between two CSS themes and determining which one to use by storing a cookie.

Access the new feature by toggling modes by clicking (or tapping) on the sun or moon icon in the top-right of the page.

Note: The cookie stored is only used to identify the theme and not used to track you at all. I'm not smart enough to try to track someone anyway.

The year was 1991. Personal computing was just becoming popular and 5.25" floppy disks were all the rage. Enter the CD-ROM. There was so much more storage potential, the possibilities seemed endless. When Sony released one of their first CD-ROM drives, they packaged it with a compliation of 6 discs called the "Laser Library." I suppose if you're going to drop $1,200 on a new technology, you might as well get some stuff to play with.

One of these discs included the Microsoft's Bookshelf software. It was a DOS application that included a simple encyclopedia, a dictionary, thesaurus, quote-book, etc. I installed it on a FreeDOS virtual machine. First thing I did was try to define the word "internet." I guess it wasn't popular enough to have its own definition in 1991. 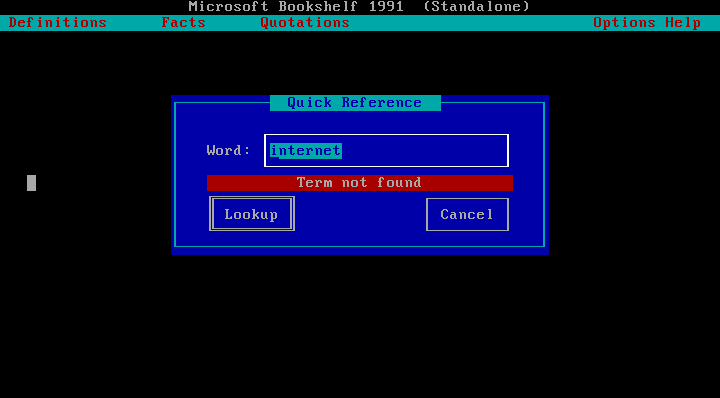 Stay tuned for more old technology posts as I dig through my library of treasures.

Life so far has been pretty crazy.  I started the semester with more to do than I anticipated.  Though, I'm not sure how I didn't expect to be busy working two jobs as a full time student.Regardless, I do have some updates I wish to share.  I plan on posting some new projects soon.  I have a guide in the works about Nintendo's gameboy games and how to replace the batteries in games.  I also have another life tips guide on what services are most compatible with devices.  I have used so many different phones/tablets/computer operating systems/online services that I have become almost an expert in which ones work best for which people.  Expect that to come soon.

I thought I would do a new series to pass the time while I think of new stuff/work on new projects to post here.  Although my opinion likely holds little weight with any of you, I figured it can't hurt to at least express my opinions.  As it turns out, a lot of people read blogs for the writers' opinions.  Who knew?

I figured I could talk about my thoughts about devices, software, and technology ecosystems from the major players I've tried so far; namely Google, Apple, and Microsoft.  When I explore a new technology I really like to immerse myself in the experience.  When I bought my first android phone, I jumped into the Google bandwagon hardcore.  When I switched to iPhone, I moved my stuff over to apple (you get the idea).

Before I really start with my initial thoughts, I thought I would explain the services I use on a day-to-day basis and quickly go over my transition of technology.  We'll start in the year 2005, since that was the year that I consider to be the year I started to make the calls about my technology. October of 2005 rolls around and our old Dell Dimension desktop died. It was your typical XP-era Dell desktop complete with a Pentium 4 processor and 15-inch flat panel monitor. My relationship with that Dell was rather emotionless: I neither liked it nor disliked it. It was there, and it was what I used. When that died my parents graciously gave me the choice of the new computer (within reason) and we settled on an iMac G5. The new G5 was just announced and debuted the notion of a built-in iSight camera and Front Row (which never really took off anyway). This iMac was a huge step for me in terms of computing. I quickly got the hang of the Mac and loved the way it worked. When Leopard came out, I upgraded right away; for me, Microsoft slowly started to fade away into the background as I grew less and less concerned with their current offerings. Shortly after 2006 began, I also bought a used PowerBook G4 online to use as my portable computer until just two years ago. I used the iMac G5 until the summer of 2010, a long time considering 2006 was the year Apple moved from PowerPC to Intel and caused PPC-based machines to lose their luster.

In 2010, I continued along the Apple path and did the only sensible thing, upgrade to another iMac of similar stature. I bought a 21.5” iMac with an i3 processor. The upgrade to that machine was just as exciting as the move from the XP-era Dell to the G5. It was loads faster and had a lot of upgraded features and design. Meanwhile, my 15” PowerBook G4 was simply not keeping up pace with the needs of student starting at a college university. It was large, slow, and the battery didn’t last more than three hours on a good day. And—after a brief and disappointing experience with an Archos 9 Windows 7 Tablet—I bought a laptop you wouldn’t have expected from someone who moved away from the PC as a platform: a Lenovo ThinkPad X220. At the time, it was a tough decision between that and the 11” MacBook Air. Both were similarly spec’d and were around the same price range.

This basically ends my technology in the past. And I’ll definitely elaborate on my experiences with each of those devices in time, but now I thought I would list the current list of devices I own and their transitions. The last device in each list is what I’m using now.

My next piece will be my thoughts on the beginnings of Android and my decision to have faith in the first Android phone!

Well: here it is.  My Blog.  My semi-useless blog.  The thing is, I can't seem to keep these things updated.  I always fall apart at some point and forget to post and it never goes anywhere.  I'm hoping this blog will be a bit different.

Why?  Because I made it.  By that, I mean I didn't just install the thing.  I started from nothing, and wrote this blog platform all myself.  Yes, it sucks.  Yes I can't program, and Yes you can laugh at me.  The thing is, this was all me though. and maybe it's not awesome and has no features and a pitiful backend.  But that's okay with me.

Here is my point.  I hope to fill this blog with interesting information from my explorations in technology and programming. I hope to fill you in on changes as I do plan on evolving this blog with more useful features someday.  So stay tuned as I begin to tell my tale, one step at a time.